ATHENS, NY—March 20, 2020  Yesterday, the Division of Materials Management Officer at the New York State Department of Environmental Conservation (NYSDEC) confirmed that Athens Stevedoring and Environmental Development LLC had withdrawn its application for a proposed Construction and Demolition waste processing facility in the Village of Athens and was no longer interested in pursuing the project.

The project had only recently come to light when, in January 2020, Keep It Greene member and Athens resident Diana Abadie made an unnerving discovery. “There’s a spot right on the Hudson River adjoining the boat dock where I often drink my morning coffee,” Diana recalls. “I noticed a for sale sign and when I called, the owner of the property told me that he was selling to a barge and trucking company.”

A series of Freedom of Information Law requests revealed specific plans to import 8,400 tons of Construction & Demolition Debris (C&DD) waste per week that would be stored, processed (i.e. crushed and sorted), and then exported by hundreds of trucks six days a week from a 6.1 acre waterfront site in the Village. Keep It Greene worked with Friends of Athens, KingstonCitizens.org, Hudson Riverkeeper, and the Village of Athens Mayor and Board of Trustees to inform the community and encourage them to organize. After an outpouring of support from the public (an online petition garnered over 2,000 signatures in only two weeks) and support from State Assemblymember Chris Tague (R) and Congressman Antonio Delgado (D), Athens Stevedoring withdrew its application and abandoned the project.

“I am very proud of how our entire community came together to make their voices heard,” said Village of Athens Mayor Stephan Bradicich.  “I have no doubt that the large and unified opposition to this project played a large part in stopping the effort.”

Although the threat to Athens may have passed, the neighboring Town of Catskill is confronting another C&DD project from Peckham Industries: an unlined landfill on the shoreline of the Hudson River that would receive 600,000 tons of waste. Although Peckham’s application to the DEC was recently returned as incomplete, the community anxiously awaits further developments.

According to Geologist David Walker, Ph.D of Keep It Greene, it’s no coincidence that these two similar projects landed in the same vicinity. “Athens and Catskill are just pieces of a larger puzzle. There are idle quarries along the Hudson River awaiting some new purpose, and New York City is the source of an enormous C&DD waste stream (twice the tonnage of its municipal waste). With barging cheaper than trucking to transport tons of materials and the Hudson Valley located closer to New York City than alternative sites, such as Seneca Meadows or Rensselaer, the area has been—and will continue to be—targeted for many more of these projects.”

In the weeks and months ahead, the coalition of environmental and community activists who fought the Athens C&D project plans to reach out to other communities fighting similar battles. “Instead of playing ‘Whack-a-Mole’ as these threats arise, we need to organize and push for proactive, comprehensive C&D waste management,” says Catherine Censor, president of Friends of Athens.

It’s a strategy that Paul Gallay, president of Riverkeeper, endorses. “The system worked here because these communities got the facts and got active. This should give everyone in the Hudson River watershed the confidence to fight misbegotten projects like these in their own communities.”

About Keep It Greene and Friends of Athens

Friends of Athens: A 501(c)(3) nonprofit dedicated to historic preservation, civic improvement, and beautification of the natural and cultivated landscape in and around the Village of Athens, New York. 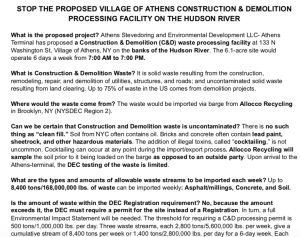 Keep It Greene and Friends of Athens have created a fact sheet about the proposed Construction & Demolition (C&D) Waste Processing Plant on the banks of the Hudson River in the Village of Athens. There is important information in the factsheet. And the information is alarming should the project come to pass.

What are we doing? Keep it Greene and Friends of Athens are setting up meetings with our county, state and federal officials.  Riverkeeper is helping by providing advice and support.

What can you do?

1.  READ and DISTRIBUTE the factsheet.

2. CONTACT the officials listed at the bottom of the fact sheet and tell them what you think about this project.
3.  If you have not done so, SIGN our petition   (There is a ‘donate money’ prompt after you sign the petition.  This is for the free platform. Donations do not come to Keep It Greene.  Please opt to share the petition instead).

Help us fight C&D process facilities along with unlined dumps on the banks of the Hudson River.  Protect our Hudson riverfront villages and towns!

Thank you for your help,

Keep It Greene and Friends of Athens