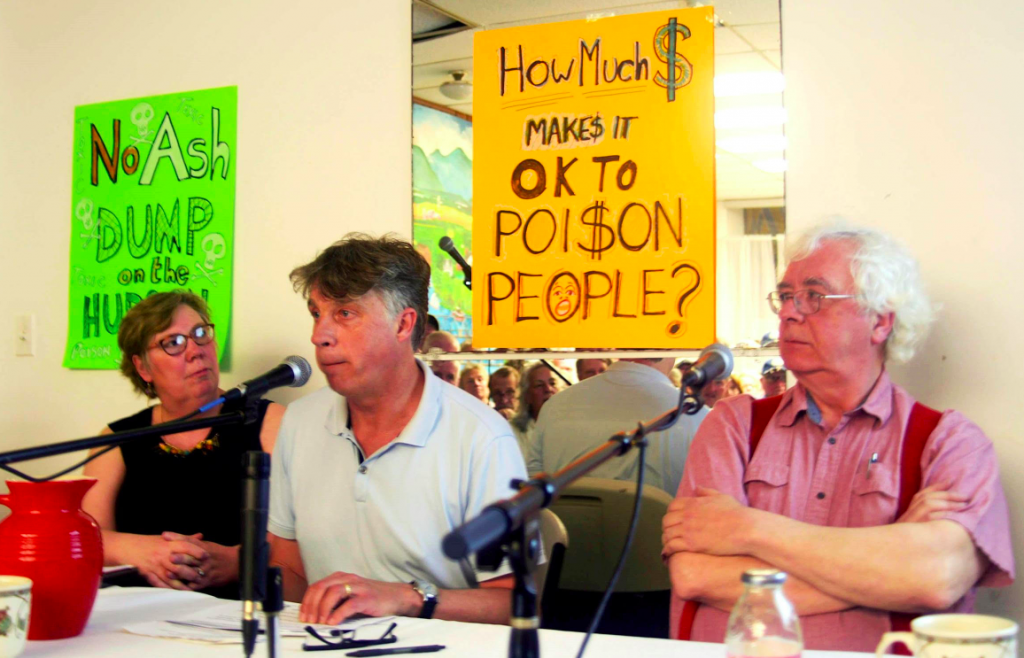 Dear Keep It Greene and Friends,

Dave Walker, noted geologist, Columbia University  Professor Emeritus and co-chair of the Peckham Action Group is moving from Greene County. He and his lovely wife Celia sold their upstate house in Catskill.  After teaching field mapping geology in the county for some thirty years, our Devonian stone ledges seem to be an innate part of his being. Physically, he won’t be here on a regular basis;  however, Dave remains committed to remotely supporting environment efforts in our region.

Let’s send Dave off with a cheer for each of the following 3 waste stream applications withdrawn from the DEC. Yes, ‘3 for 3’!

1/3:  Wheelabrator’s proposal to dump dioxin laden incinerator ash in a Catskill quarry was the first of 3 dreadful proposals. The project would have meant 445,000 tons of toxic waste being trucked into Catskill annually for 48 years. Dave’s famous slide of a kitchen sieve to depict the quarry’s inability to prevent toxic leachate  from running into the river was uncannily relatable and memorable. His geological research pointing out the holes in Wheelabrator’s  lengthly DEC application was a game changer.  The company withdrew their application from the DEC on June 12, 2019.

2/3: “The Peckham berm project was in fact an unlined landfill for construction and demolition waste. It was supposedly justified in their proposal as a screening device to protect potential viewers from having to see the asphalt plant planned for the old Holcim cement kiln site. It was unclear how a mammoth berm would be a scenic improvement. Peckham has not deemed it necessary to hide their two asphalt plants in Athens.  The DEC also found the proposal doubtful. So we welcome Peckham’s withdrawal of the proposal in response to the DEC finding that the application was incomplete.”  Dave Walker, June 15, 2020.

3/3: Athens Stevedoring and Environmental Development LLC had proposed a facility to store and process some 8,400 tons of construction and debris material per week. After crushing, it would have been hauled away by truck from the 6.1 acre waterfront site in the Village of Athens.

On March 1, 2020, Dave told the story about these 3 related waste projects to an attentive crowd of 250 at the Village of Athens Firehouse. Dave concluded his story by asking the attendees if they wanted the project,  or should we tell the barge company to head back up river to (NYC)?  The animated audience loudly declared their opposition. Dave responded, “Well I see that you do have strong opinions”. Less than three weeks later, Athens Stevedoring withdrew their application from the DEC. March 17, 2020.

Keep It Greene has had amazing partners. ‘3 for 3’ would have been unobtainable without these talented Friends*.  Likewise, Dave’s  contributions were paramount to halting the  2 unlined waste dumps plus the 1 waste processing facility.